Under the hood, the network module is maintaining a forward proxy for forwarding data out of the keynode, and a reverse proxy for receiving data into the keynode. All the data going out and into the keynode are secured using TLS. Some keynodes are reachable using their IP addresses directly, while many live behind some NAT devices preventing direct connections to be established. For those connections that are natted, the network module uses a nat traversal technique called hole-punch to establish a direct p2p connection. It is worth noting that all types of connection other than Symmetric NAT are supported, and the Symmetric NAT connection can be supported through relay that are yet to be implemented.

Where you can get connection information. 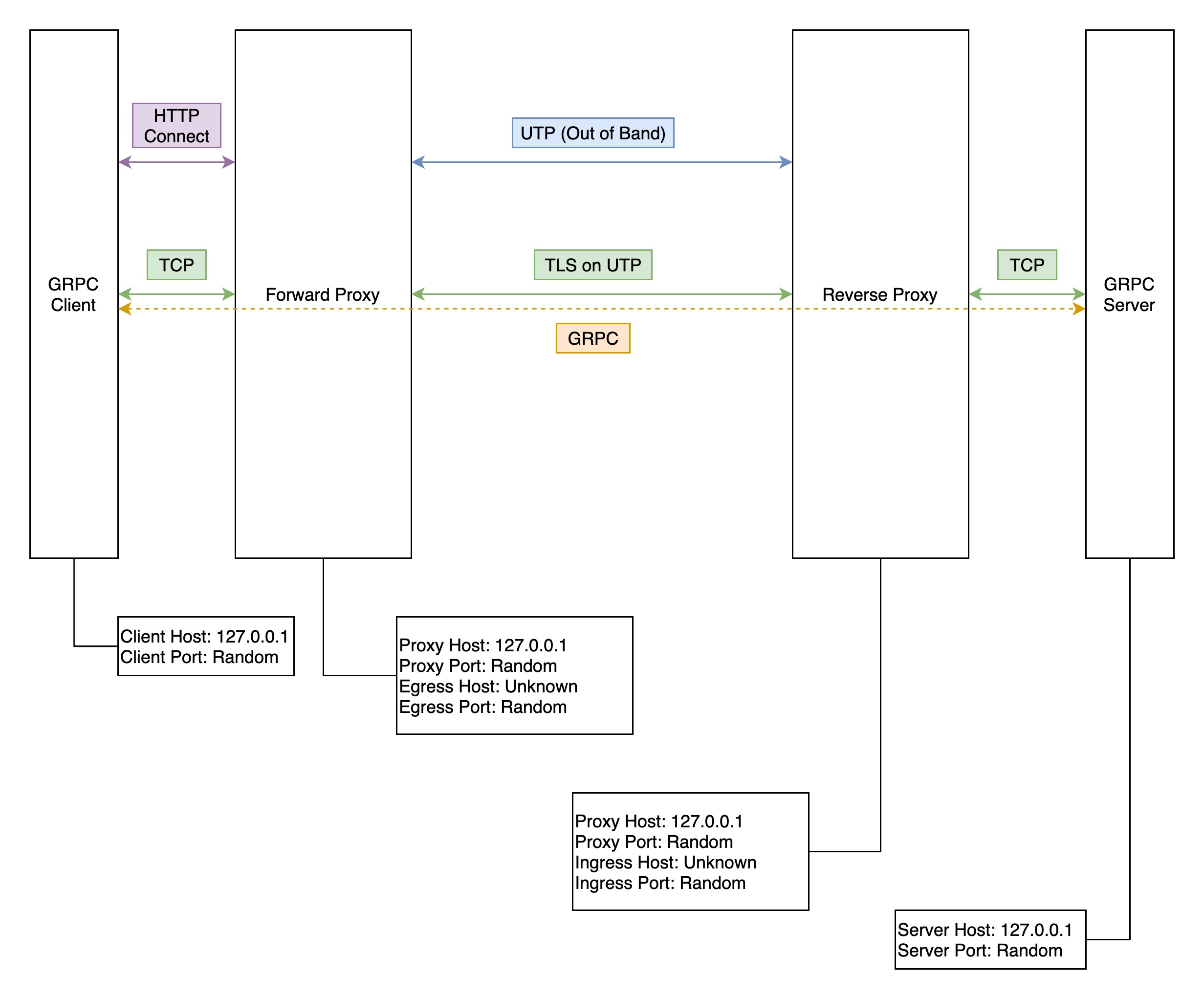 Within the architecture, the GRPC client, forward proxy, reverse proxy, and GRPC server instance persist over multiple GRPC calls, meaning you can reuse the communication channel.

There is another UTP channel for out of band communications between the two proxies, and it is used for sending hole-punch and keep-alive messages. This out of band channel is similar to UDP datagrams in a sense that it is unreliable, and not connection oriented. However, it enables the establishment of peer to peer natted connections.

The egress and ingress host and port are used for communication between the proxies, the public address of them are unknown to themselves but will be known by the receiving party due to NAT translation.

The communication mechanism of the network module is shown below. 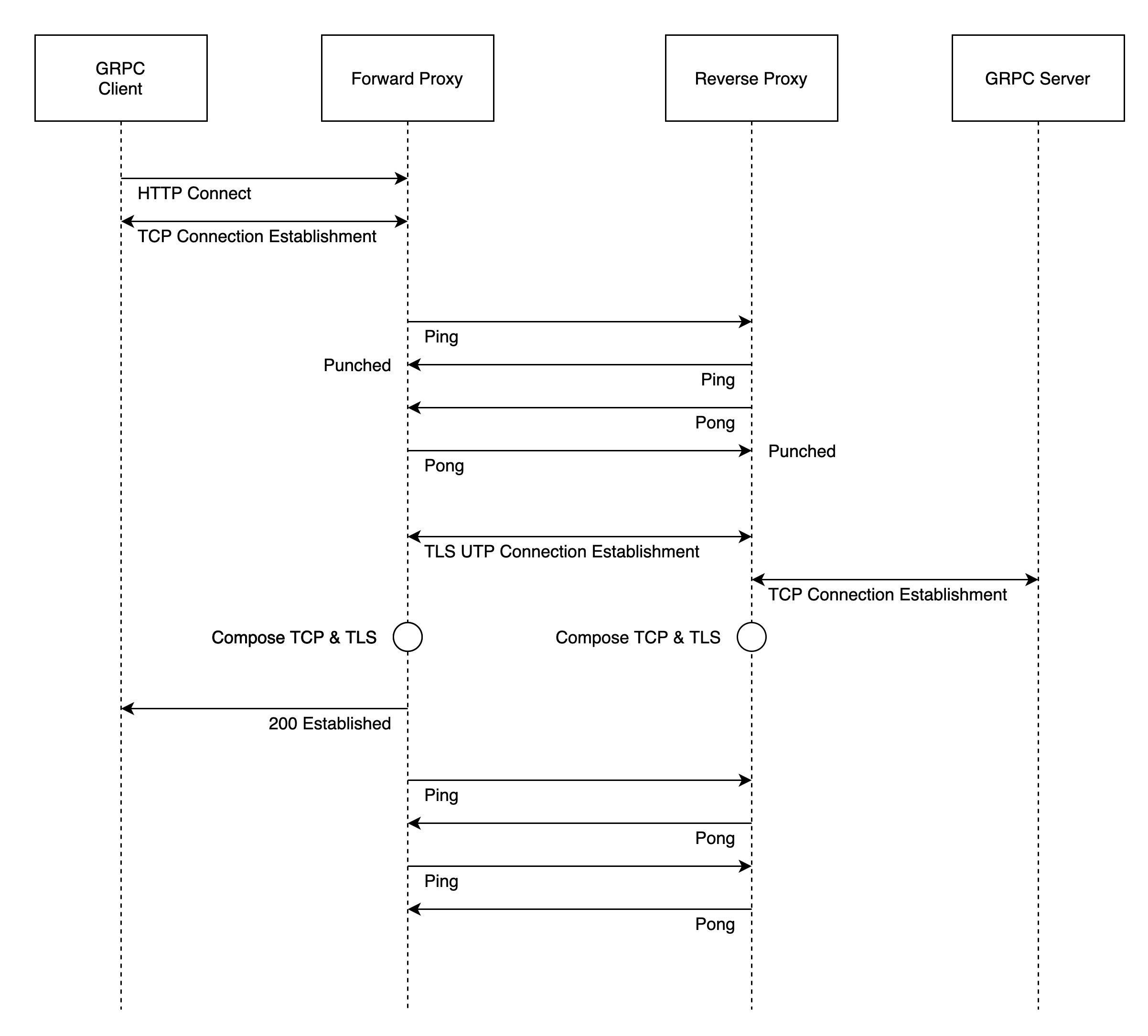 The HTTP Connect requests a TCP socket between the GRPC client and forward proxy, and the TCP connection establishment happens immediately after the request.

Once the connection between the proxies are punched and connected, the reverse proxy establishes a TCP connection with the GRPC server.

Some time after the establishments, the socket composition happens, which pipes the data from one socket into another, allowing data to pass through.

Finally, forward sends a connection established response to the client indicating the connection to the GRPC server is successfully established and data can be sent through the socket.

Hole punch is a NAT traversal technique used for establishing a direct connection between two keynodes where at least one keynodes are behind the NAT.

The idea of hole punching is simple, all it does is coordinating both keynodes to start sending UDP packets to each other's public IP and port at roughly the same time. This would implicitly alters NAT's firewall rules and allows direct communication to happen.

Once hole punch is completed successfully, a periodic UDP packet should be sent from both sides to keep the connection (or rather, the altered firewall rules) alive.

A simple scenario is shown below where the keynode A and B are behind a NAT, and the firewall in the NATs disallow any incoming packets.

If keynode A is the one that send the first hole punch packet to keynode B, this packet would not be allowed into B's NAT due to the firewall rule. However, since A's firewall saw a packet going out to B, it is expecting packets coming back from B, and tempororily allows B's incoming packets.

Then, the keynode B also sends a hole punch packet to keynode A, this packet would be allowed into A's NAT due to the altered firewall rules. Also noted that B's NAT also allows A's incoming packet for the same reason as above.

At this point, the connection is considered to be established. And subsequent packets are allowed in and out of both keynodes.

The catch is that the firewall rules are temporary, which means the rules would be deleted if it sees no packets flowing between the two keynodes after a certain period of time, typically 30 seconds. Therefore , there needs to be a keep alive packet sent from both sides periodically to keep the connection alive.

For hole punch to work, following conditions must be satified:

This whole hole punching process is part of the NAT connection management included in Forward and Reverse proxy.

If you want GRPC clients making requests from keynode A to keynode B ONLY, then you just need to add a connection in A's forward proxy (and B's reverse proxy if natted). With this setup, keynode B's client cannot contact A's GRPC server.

Note that the response of the GRPC request can be transferred back from B to A. You just cannot initate a request from B to A.

If you want GRPC clients in keynode A and B making requests to each other. You need to perform two unidirectional commuinication establishment, one from A's forward proxy, the other from B's forward proxy.

Due to the lack of relaying services, the network module only allows direct connection and hole punchable connections. Any other connections such as the Symetric NAT scenario cannot be connected.

There is not yet a way to notify the caller in the case where a connection failed to be kept alive, or timed out.

We can separate the networking to 3 layers:

Right now these are:

It is ideal to have these 3 layers separated so that it is possible innovate on them separately. So in the future, it may be possible to do instead:

There are some constraints on relevant protocols/libraries:

As you can see there's alot of constraints which narrows down choices. The most generic stack possible would be: